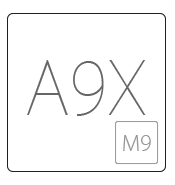 Use your voice to send messages, set reminders and more
Use your iPad hands-free
Listen to and identify songs

Built-in 38.5-watt-hour rechargeable lithium-polymer battery
Up to 10 hours of sur?ng the web on Wi-Fi, watching video or listening to music
Charging via power adapter or USB to computer system

Video mirroring and video out support: Up to 1080p through Lightning Digital AV Adapter and Lightning to VGA Adapter (adapters sold separately)

*Please call or email us for availability and pricing.